How To Play
-First you need the app Heads Up from Ellen DeGeneres. If you do not want to pay for the app, there is another alternative app for this known as Charades.
-Now rules are much simple here.
-Now place your phone on forehead and try to guess from hints and clues your friends gives you.
-If they guess the clues wrong, the person holding the phone has to tilt up and if they guess right, tilt the phone down.
-If you have Charades App, you can create your own section and have fun
-Keep Repeating the process until you get tired.

Download the Apps given below
Heads Up
App Store
Play Store

There are many apps who have the same function, but for me these 2 are really good. If you don’t mind paying for app and limited categories, I prefer Heads Up. But Personally I prefer Charades as it is fun and you can create your own categories to play with others.

Let me know your thoughts in the comments section. Share this blog with your friends and families, if you feel this is fun. 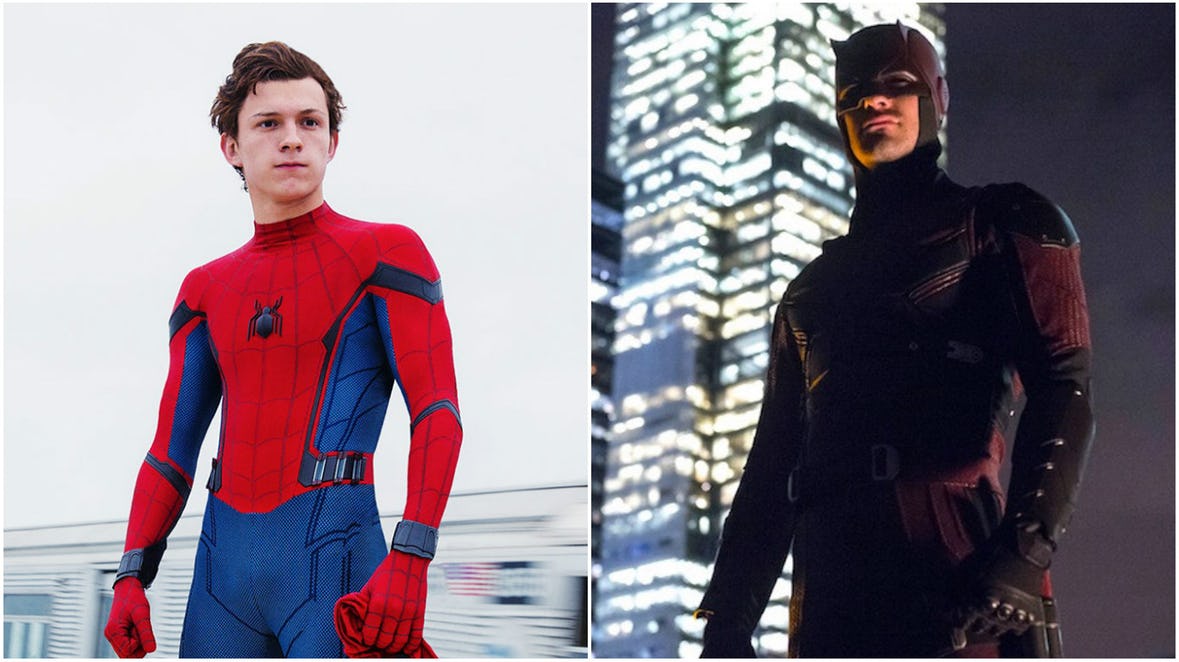 So here I am writing another blog. You know what I have been thinking? I have been thinking how my two favorite superheroes can team up apart from 90s TV Show? Since MCU is a big phenomenon which did justice to my two favourite supers.
Daredevil-The Man Without Fear and The Amazing Spider-Man, I want to tell why they should team up. So if you are against the Idea, I would suggest not read it, if you are interested, let us begin.

Both of my favorite superheroes have one thing in common and which is basic why I really want them to team up. That is Street Level Crime. They both focus on cleaning up the streets of New York, unlike some Avengers or Illuminati that focus on the bigger, worldly threats. You cannot say they don’t bump into each other while attempting to stop the same robbery.

We all know every individual is different. Even though are relatively similar, it doesn’t mean that they will have same approach on life. It’s is easy to say that Daredevil has a gritty, dark outlook on life. He knows that life isn’t all happy happy and rainbows, and the things he does has consequences. Even he told to his famous rival Kingpin the dialogue “Not Everyone deserve a Happy Ending”. See the thing about Spider-Man is much younger and still has a pretty happy outlook on life. For the most part, he likes being a hero because it’s fun, and so far he hasn’t had many bad things happen to him (with the exception of Uncle Ben).
Daredevil can show Spider-Man that things don’t always end up being in our favor. He can show Spider-Man the darker side of New York and show him that heroes have to make tough, dark decisions sometimes, and they can’t always be having funny business. If we see the other side of the coin even now and then Spider-Man could show Daredevil that being a hero can have fun moments. Daredevil is mostly dark and serious throughout the series with a little humor and Spider-Man could help him have a laugh or two along their journey. Just think about it?

We all know that Infinity war is coming and Thanos is set to destroy the earth just to find stone. So Imagine the big mess of city again for New York. This is where I believe they can team up. Spidey and Daredevil could team up to clean up the streets and stop all the crime that’s probably taking place. The Same thing will happen what happened in Avengers 1, crime bosses took advantage of it and made it seem like they are living in hell. It would be great to show Spider-Man dealing with a worldwide tragedy in Avengers 4 and then show him dealing with the consequences in his solo outing. We can get some insight on Daredevil’s point of view of the battle.

The KingPin of Crime

Above the reference point, if we are talking about crime, this guy means business and that also in wrong way that even Stark do not want to work with him as well and maybe Oscorp might do a joint venture thing with him. Who knows? It happens many times in Comics and other medias. I am pretty sure these guys are not going to be sitting ducks and they are bound to face the same enemy. They could make it so that the criminals are Wilson Fisk’s men, and Daredevil’s been going after them for a while now. At this robbery, though, Spider-Man shows up because that’s the type of crime he stops. They run into each other and have to stop the crime together. After some disagreements and arguements, Daredevil informs Spider-Man of Wilson Fisk and they team up to stop him. Wilson Fisk is easily one of the best villains in the MCU, and he often fights Spider-Man in the comics so he would make a great antagonist of the movie or TV Show. Best of all he wouldn’t need as much backstory since he’s already been established.

I am pretty sure a little humor is needed even if they are teaming up. It has been long going on and majority of fan base want this including me. After they keep running into each other at the theft, Daredevil would presumably endeavor to make tracks in an opposite direction from Spider-Man, and Spider-Man would no uncertainty tail him and pester him too. “How’d you get visually impaired?” “For what reason do you battle with club?” “How would you put your clothes on toward the beginning of the day?” They could then have a brisk battle and afterward Daredevil would reluctantly give Spider-Man chance to man follow alongside him.

It would make me happy if they do that.

I will show you samples what would happen if they actual Team-Up. 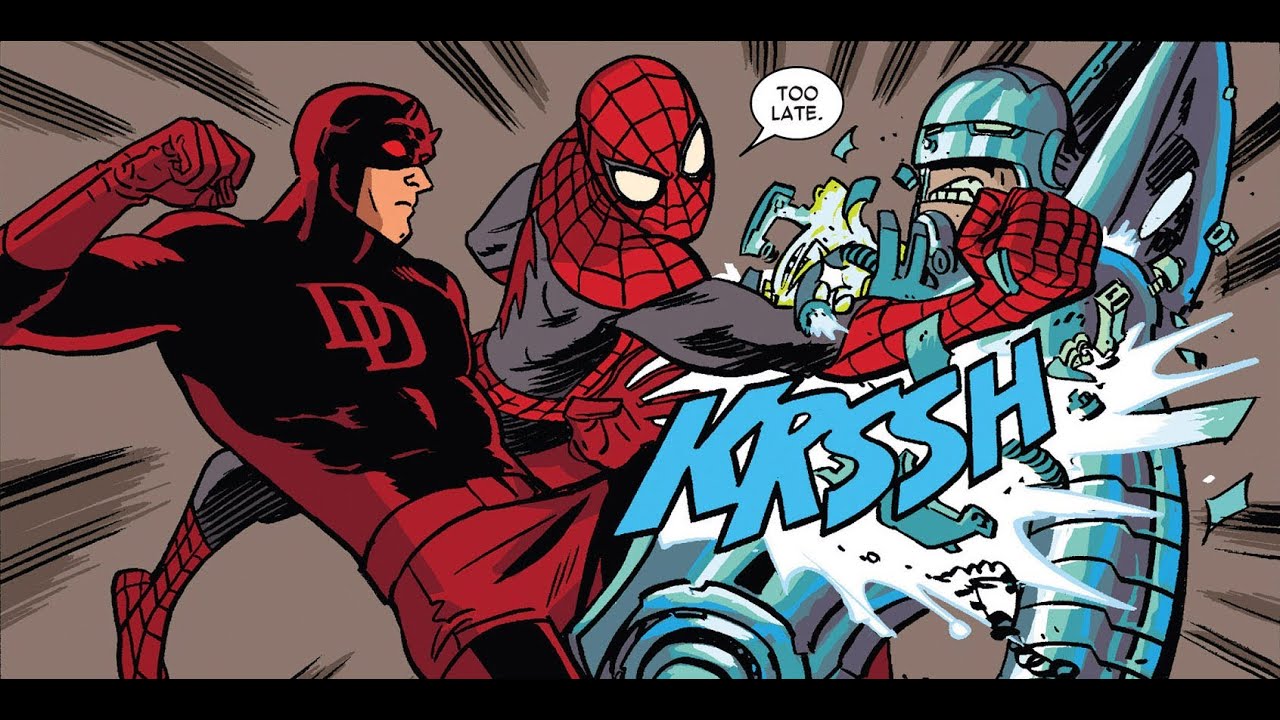 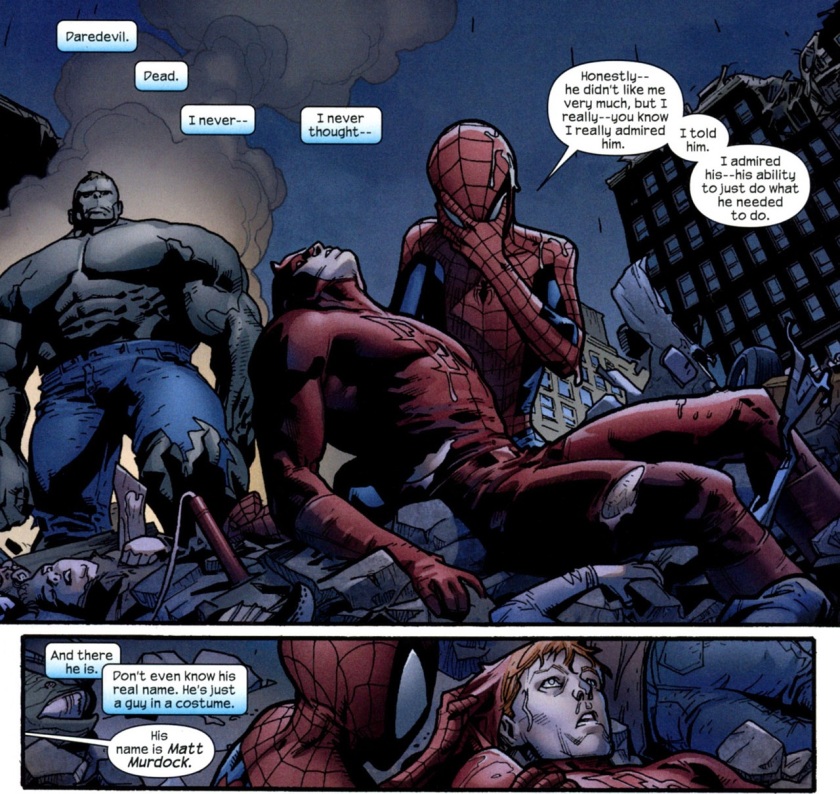 Also they can be good friends as you can see below 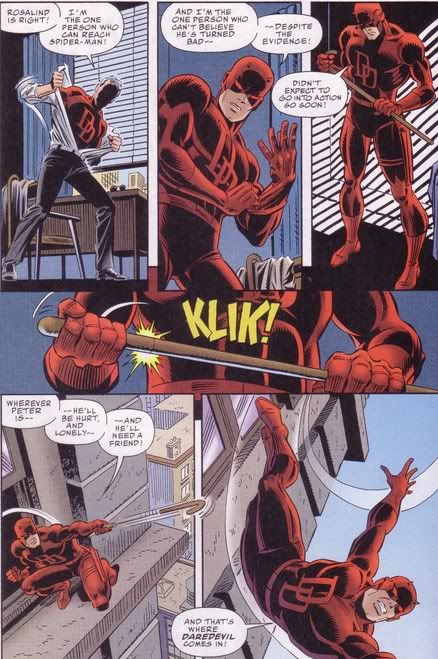